Which NFL team’s hot start do we trust the least? 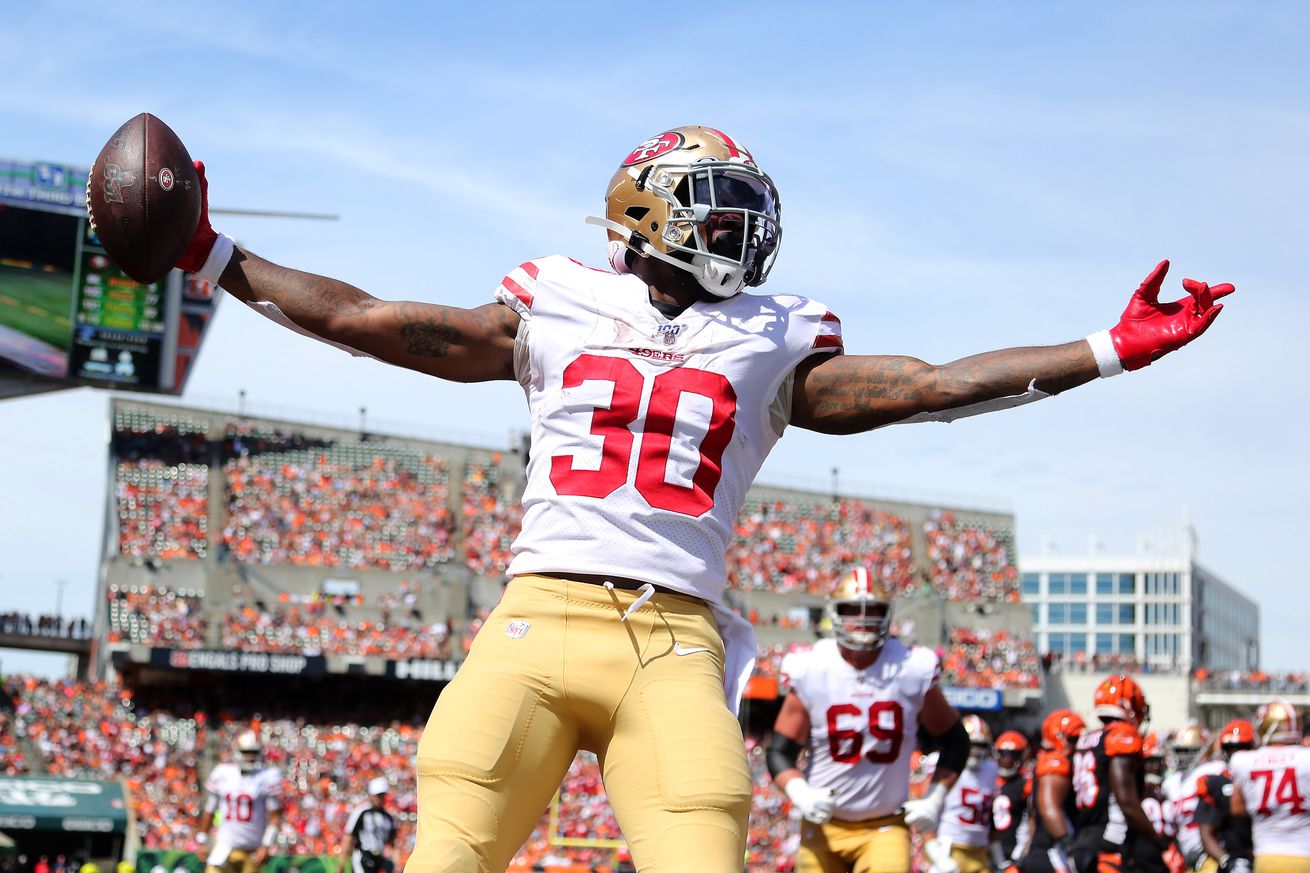 Heading into Week 3, 10 teams have yet to lose — and not all of them will make it to the postseason.

After two weeks, the dream of an undefeated season remains for nine NFL teams — including three in the NFC West — plus the still-unbeaten 1-0-1 Lions. Those teams won’t all make the playoffs, but a 2-0 record gives them a leg up.

Not all these hot starts are created equally, though. Some are the product of proficiency on the field and will lead to a spot in the playoffs. Others are a function of weak scheduling and a few lucky bounces.

The Packers got out to 2-0 by using a smothering defense and a very familiar offense to dispatch two division rivals who’d been predicted to stand atop the NFC North. The Ravens started 2-0 thanks to Lamar Jackson’s heroics, though those wins came over the worst team of 2018 (Arizona) and the worst team of 2019 (Miami). The Bills’ defense has been stingy through road wins against the Jets and Giants, but if they can’t keep that up the only title they’ll earn in 2019 is “King of Northern New Jersey.”

Some of these meteoric beginnings are destined to burn up in the atmosphere of the regular season. Which teams have failed to convince us of their legitimacy despite strong starts?

I like what the Niners have done early in the season. Despite a couple of bad decisions, Jimmy Garoppolo has gone back to looking like a legitimate franchise quarterback. The defense has been solid as well, allowing only 4.7 yards per play and 17 points per game.

That said, I’m not sold on this offense yet. While putting up 31 points on the Buccaneers looks more impressive after Tampa shut down the Panthers in Week 2, 14 of those points came off pick-sixes and San Francisco went 0-for-3 when it came to turning red zone opportunities into touchdowns. Even though Garoppolo converted three of his five red zone trips into TDs against the Bengals one week later, that 37.5 percent success rate is 27th best in the league.

There’s a lot of talent in Santa Clara, but it’s still an unproven group that will need to jell quickly to keep 2019’s fast start intact. Garoppolo has never started more than five games in a season (and is coming off a regrettable preseason that saw him throw five straight interceptions at one point in practice). He may not get much help from a once-strong running game that’s been diminished by injuries to Jerick McKinnon and Tevin Coleman, though Raheem Mostert has been useful when pressed into action so far. His receiving corps has been uneven as well, with Dante Pettis sliding down the depth chart and Marquise Goodwin having a limited impact.

The defense looks good, even with rookie Nick Bosa battling a high ankle sprain and Jimmie Ward yet to take the field. That said, those performances came against unimpressive Cincinnati and Tampa Bay offenses. An easy first half of the 2019 schedule should provide plenty of lead time for the team to sort things out, but we may not know who these 49ers really are until November. — Christian D’Andrea

I actually like the Buccaneers. I thought they were primed to be a surprising team in 2019 and so far they look pretty good. But why they look good is the part that’s a little unexpected.

Tampa Bay’s offense is kind of a mess. It’s 27th in total yards and finished Week 1 with four turnovers — two of which were Jameis Winston interceptions returned for touchdowns. The Buccaneers’ potential resurgence seemed dependent upon Bruce Arians fixing the offense, but that unit looks like it’s taken a step backwards.

Instead, it’s the defense that has the Buccaneers looking like an NFC South favorite. With Todd Bowles as the defensive coordinator, Tampa Bay is No. 8 in total defense. It’s allowing 2.7 yards per rushing attempt and has given up just one offensive touchdown.

The Buccaneers have invested a lot of resources on that side of the ball. They signed Ndamukong Suh, Shaquil Barrett, and Deone Bucannon in free agency, and selected defensive players with their first five picks of the 2019 NFL Draft. However, I’m still not convinced the Tampa Bay defense is that great.

Barrett was really, really good in Week 2 and looks well worth the $4 million it cost to sign him. But he’s the only player on the defense that has any sacks, and it’s entirely possible that his three-sack performance was a product of Panthers left tackle Daryl Williams having a rough night.

For that matter, the Buccaneers played well defensively against the 49ers and Panthers — two teams that probably have more questions than answers on offense right now.

If Tampa Bay does end up being a contender, I still think it’ll be the offense that leads the way. The defense is much better than it was in 2018, but an elite group? I’m not convinced. — Adam Stites

I’m not sure about you all, but I’m pretty damn surprised the Lions are (technically) undefeated heading into Week 3. Thanks to a Week 1 tie against the Arizona Cardinals and the Lions’ 13-10 win over the Chargers, the Lions are sitting at 1-0-1, but Detroit has some issues that look pretty concerning, even early on.

Take their win. In the third quarter, the Chargers led 10-6 and were trying to extend their lead when running back Austin Ekeler fumbled what would’ve been a 1-yard touchdown. On the next two LA drives, punter Ty Long, who had to fill in for an injured Michael Badgley, missed two field goals. Detroit scored a go-ahead touchdown with 4:24 before Philip Rivers threw an interception that sealed the Lions victory.

So if anything, the Chargers beat themselves far more than the Lions did.

And as for the tie against the Cardinals, Detroit blew what should’ve been an easy win. The Lions were ahead by a whopping three scores at the start of the fourth quarter, and let the Cardinals score 18 unanswered points to tie and send it to OT. Pride of Detroit blames the conservative playcalling (and poor coaching, including Detroit calling a TO that negated a Lions third-down conversion) at the end for a big contributing factor to the loss:

But if you rewatch the next play, you can see the chaos on the side of the field. Coaches are literally jumping up and down in anger, the offense—yet again—barely gets to the line in time before the playclock runs out, and then this is the play they run:

The biggest third-and-5 of the game.

With an offensive line struggling to protect Stafford.

No receiver is even looking for the ball and Stafford is toast.

They were completely unprepared to make another call. pic.twitter.com/p5S10ELpzI

The main reason the Lions didn’t lose was because Kliff Kingsbury was way too conservative by kicking field goals and settling for a tie in OT.

Sure, the Lions are undefeated right now. But they’ve got upcoming games against the Eagles, Chiefs, Packers, and Vikings before they even get through the month of October (yikes). That looks pretty brutal, considering how they barely won their first couple of games. — Morgan Moriarty

I’m not buying what the Bills are selling. They’ve notched two wins to start the season — against the lowly Jets and Giants — and have a decent chance at beginning 3-0 thanks to a matchup with the Bengals on tap next. They also have a relatively easy upcoming schedule (as do all teams that play the Dolphins twice) until they hit a late-season stretch where they have to play the Cowboys, Ravens, Steelers, and Patriots.

There are winnable games before then, but the Bills are eventually going to lose some of those games they should win.

Josh Allen is still wildly inconsistent at quarterback, with a two-interception, two-fumble game against the Jets to start the season. He played much better against the Giants and while his completion percentage is up this year, he still has a tendency to miss wide-open receivers.

Sean McDermott’s defense is better than advertised, but two wins at the Meadowlands does not move the needle.

The last five times the Bills started the season at 2-0, they haven’t made the playoffs, and finished with a winning record just once. Because they play in the same division as the Patriots, their only real shot at the playoffs is as a wild card team. That will depend on Allen winning all the games he’s supposed to, and I’m not betting on that happening. — James Brady