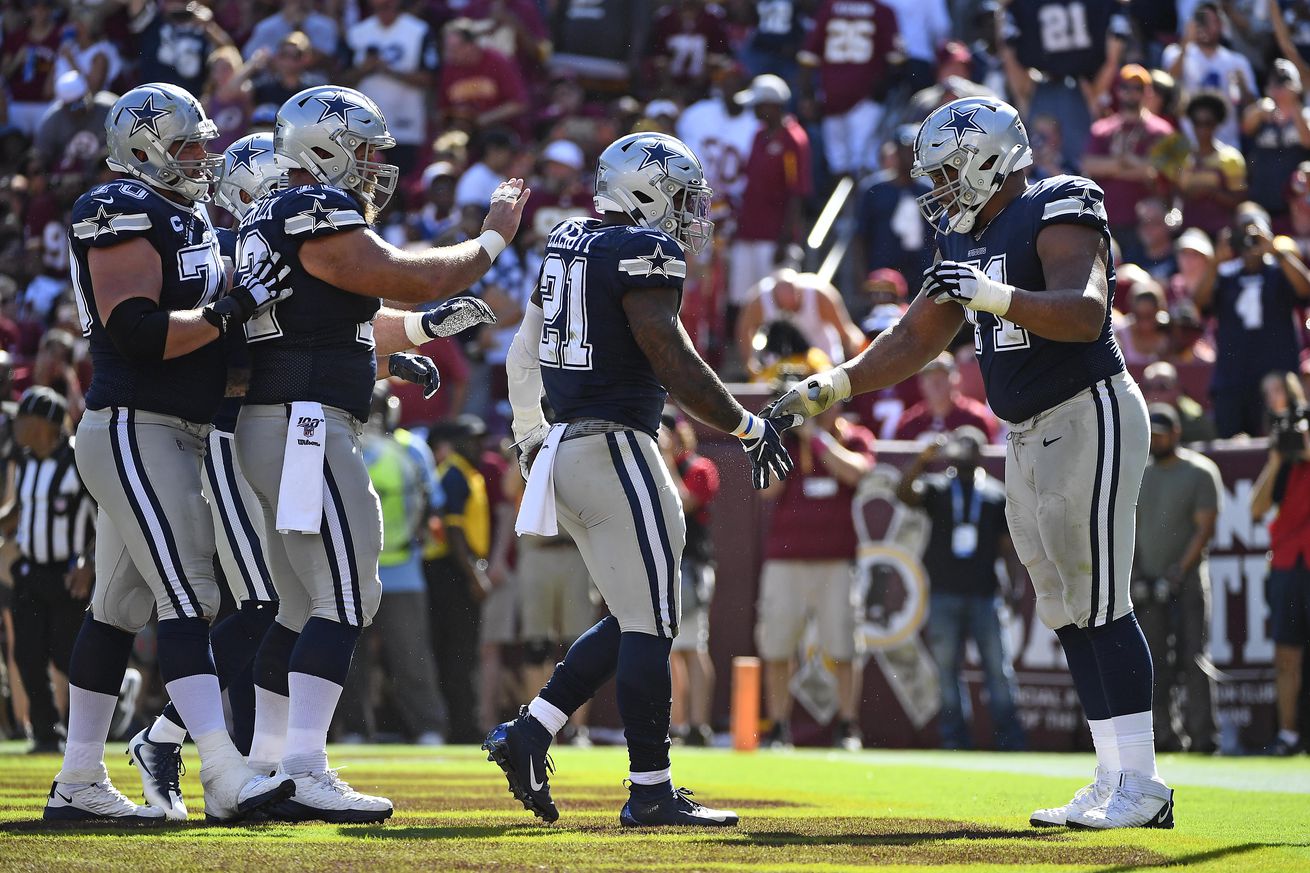 The Cowboys offensive line were remarkably good in week two on the road in Washington.

[Each week we will look back at the game to focus on a single position group and how they performed. Whether it’s high-praise for the Cowboys biggest contributors to another victory formation, or the scapegoats for any potential losses, we’ll spotlight one personnel grouping for review.]

In week two, the Cowboys notched another victory against a division rival as they defeated Washington 31-21 at FedEx Field. For the Cowboys offense to have the success they did against Washington, you have to give credit where credit is due - the offensive line. No position group deserves more credit in this game than the big uglies upfront as they kept Dak Prescott clean and only allowed one sack that the quarterback rolled into.

It certainly seems like Tyron Smith is as good as he’s ever been in 2019. Being one of the perennial All-Pro linemen for as long as he’s been is no easy task. Smith has faced his fair share of nicks and bruises but for the most part, he’s been the ultimate protector of Dak Prescott.

One of the more iconic plays from this past game is the 42-yard zone-read keeper by Prescott with the infamous stiff-arm to Josh Norman. None of that is even remotely possible without Tyron Smith doing an excellent job of blocking here. Watch as former NFL offensive lineman, Geoff Schwartz, breaks it down:

Y’all ... freaking clinic footwork and execution by the @dallascowboys LT Tyron Smith on Dak Prescott’s long run. The Redskins run a gap exchange to force Dak to pull the ball and Tyron’s footwork and prep allow him to make a tougher block than it looks. Great work pic.twitter.com/V9IJFn3eSU

Now, Connor Williams didn’t have the most phenomenal start as he will be given blame for the only sack on the day. Williams is still learning the process of playing left guard for the Cowboys and how to use his newly-built body strength for the position. However, Williams certainly is not the liability he was at times last year and deserves partial credit for his abilities in this game though it helps to be sandwiched between Tyron Smith and Travis Frederick.

On this play, we see Connor Williams make an excellent read to come off his block and pick up the linebacker. This is not something Williams was doing regularly last season but this excellent diagnosis by Williams springs Ezekiel Elliott for a nice gain:

Nice job by Connor Williams to come off the double team and pick up the filling LB. Also, a nice reach block by Jason Witten on Montez Sweat to open the alley to the 2nd level for Zeke.

What a difference a year makes as the glue that holds this all together has returned in a huge way. We’re talking about Travis Frederick, of course. Frederick’s return has not only helped in the development of Connor Williams but it has made life so much easier for quarterback Dak Prescott.

What a difference Travis Frederick makes...

Number of Dak SACKS in the first game of 2018: Six

Number of Dak PRESSURES through the first two games of 2019: Six (league best)

Frederick was outstanding in this game at Washington and was a big reason why we never heard the names of Da’Ron Payne, Tim Settle, or Matt Ioannidis called in the game. After the miscommunication that led to the Ryan Kerrigan sack, the interior protection was outstanding for the rest of the game. Travis Frederick is back and better than ever, which means Dak Prescott will continue to have one of the cleanest jerseys on Sunday.

What else is there to really say about Zack Martin? He’s been notching All-Pro accolades and Pro Bowls since his rookie season. There is a reason he’s the highest-paid guard in the NFL and he’s earned every penny. Martin has been dealing with a few nagging injuries and still manages to play at an elite level through all the pain.

Zack Martin owns the highest pass-block grade (87.1) for a guard in the entire #NFL pic.twitter.com/2raDiW3kES

The relationship between the Cowboys and La’el Collins is one of those you don’t see too often in football anymore. They both do right by each other and the Cowboys just re-upped their investment in Collins, which was a surprise re-signing to say the least. La’el Collins has had a phenomenal start to the season and was superb on Sunday against Washington. John Owning took the time out to show every snap of his:

Collins did a great job protecting his inside edge, forcing Kerrigan to take the outside track. Also saw Collins use the bait technique a couple times. pic.twitter.com/rbxjTn8m5z

One of Collins’ best snaps of the game was this tag-team effort along with Zack Martin to spring Ezekiel Elliott and get some room for the offense.

The Cowboys offensive line is back to dominating the opposition which is the biggest contributor to their offensive success thus far. Dak Prescott is taking that next step and leads the league in numerous quarterback statistics. The Cowboys passing attack is one of the most lethal in all of the NFL and their rushing offense is still as potent as ever. None of that is possible without a phenomenal front five and the Cowboys’ offensive line is coming for their “Best in NFL” title. Opponents beware.

Steelers vs. 49ers, who wins and why?

Germain Ifedi and penalties in the Eastern Time Zone