Can Eli Manning still be an NFL starting QB in 2020? 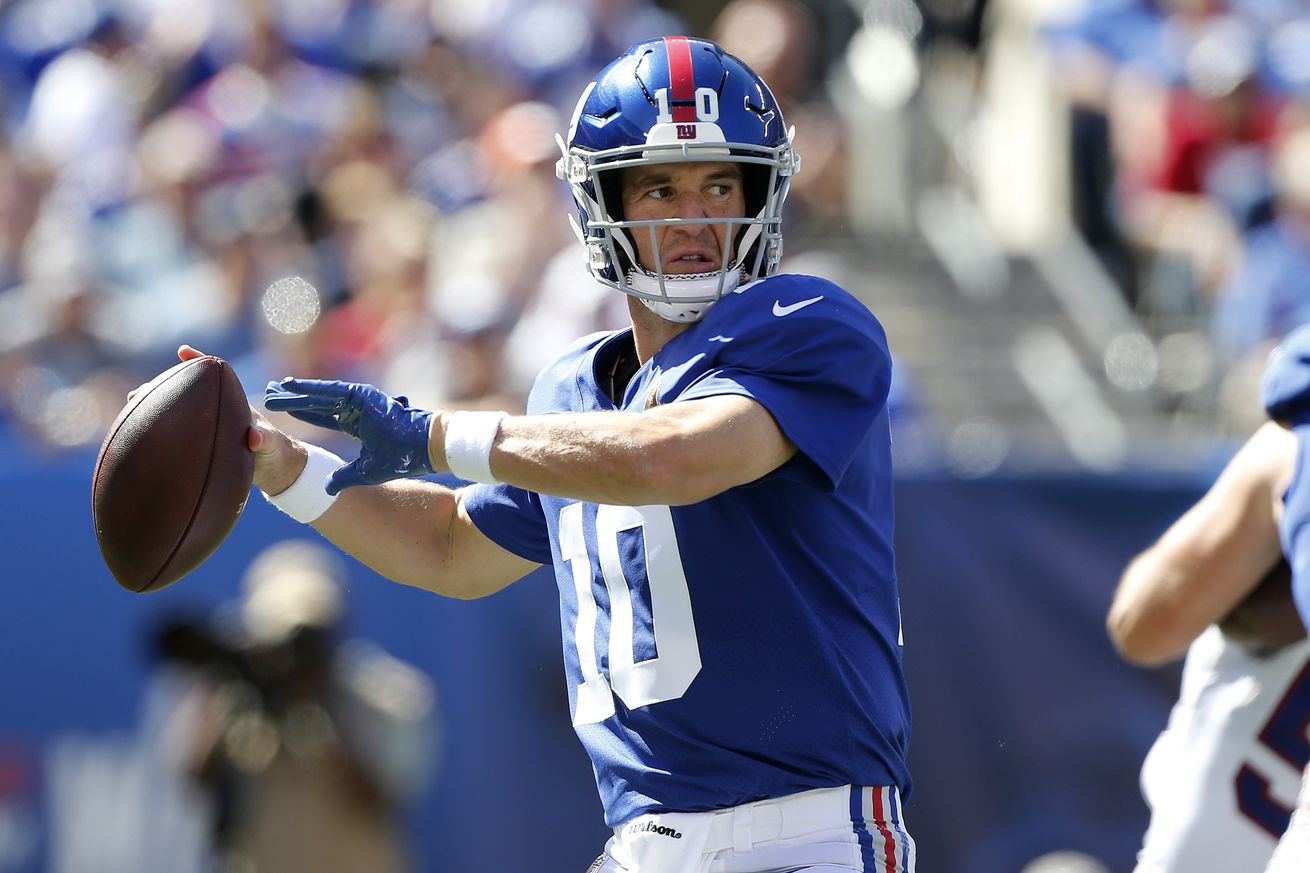 The demoted Giants quarterback will be 39 years old next year. Would he have anything left to give?

Barring disaster, Eli Manning’s time in New York will come to an end in January.

The two-time Super Bowl MVP made it only two weeks into his 16th NFL season before getting benched. The Giants’ 0-2 record — neither game has been particularly close or even interesting — forced hot-seat head coach Pat Shurmur to end the Manning era with a whimper. In his stead, rookie quarterback Daniel Jones will take the reins of an offense otherwise led by Saquon Barkley, Evan Engram, and a long list of talented receivers who are either currently hurt or suspended.

For the next 15 weeks, Manning will be a high-value backup for a team with few legitimate postseason aspirations. Then, once the book closes on the 2019 season, he’ll be a free agent. That leaves the four-time Pro Bowler with two options next spring. He can either retire after a long and rewarding career, or he can strike out in search for another contract and one more go-round in the NFL.

Will he want to come back for a 18th season? Should he?

Manning isn’t great at this stage in his career. With the exception of two absurd playoff runs, he may not have ever been traditionally great. He’s had 30+ touchdown passes only three times in his career — coincidentally, the same amount of times he’s led the league in interceptions thrown.

He’s no longer the guy you want to lead your team through a firefight, but even in his diminished state he can be enough of a caretaker to win with a talented roster. Forget about his two games for a Giants team whose leading wideouts are Bennie Fowler and Cody Latimer, or the fact he played for a coach who drew up a designed roll-out for a famously immobile 38-year-old on fourth down. Manning’s last four years have painted him as a risk-averse caretaker capable of doing enough to allow others around him to shine.

In the four years before 2019 — years in which he had above-average to great wideouts capable of creating space downfield — Manning’s catchable pass rate never dipped below 76 percent. 74 percent of his 2018 passes were deemed “on target” by Sports Information Systems, good for the ninth-best rate in the league. His 66 percent completion rate that fall was the highest of his career by nearly three full points. With the right personnel around him, a 37-year-old Manning was still delivering solid balls to proper targets downfield.

Does that mean your team should count on him to revive a moribund offense or fend off a hard-charging young quarterback for starting duties? Probably not. But in a league where Joe Flacco can be John Elway’s presumptive savior in Denver and players like Luke Falk, Kyle Allen, Trevor Siemian, Gardner Minshew, and Mason Rudolph have all been pegged for starting duties just three weeks into the season, I would struggle to believe Manning can’t at least fill a “Miami Dolphin Jay Cutler” role in 2020. — Christian D’Andrea

The NFL is in the midst of a passing game renaissance with statistics and point totals soaring to new heights. Manning’s numbers haven’t seen a correlating rise, though.

In every season between 2008 and 2018, his passer rating finished between 80 and 94. His completion percentage, touchdowns, and interceptions haven’t seen much variance. If Manning’s play holds — a pretty big if considering he’ll be 39 in January — a reasonable expectation is a team would get about 20-30 touchdowns, 10-15 interceptions, and a passer rating around 90.

Does any team want that?

Maybe those were top-10 numbers back in 2008, but not now. There were 24 starting quarterbacks who finished the 2018 season with a passer rating above 90. That’s who Manning is at this point: a well below-average quarterback.

So unless 39-year-old Manning has a hidden spring in his step that’ll cause a 2020 resurgence, what in the world is a team expecting to gain from starting him? The Jay Cutler stopgap for the Dolphins in 2017 proved exactly why that’s a waste of time. Miami finished 6-10, third place in the AFC East, and accomplished a whole lot of nothing, except perhaps set the stage for its world-class ineptitude in 2019 that will end with a top draft pick.

A team shouldn’t start Manning in the year 2020, just like they shouldn’t start Cutler, Brett Favre, or Peyton Manning. You could do a lot worse than Manning as a backup, but it’d be more worthwhile to have a young quarterback to groom in that spot instead. — Adam Stites

Steelers vs. 49ers, who wins and why?