Josh Rosen is starting at quarterback for Miami, what that means for the Dallas Cowboys 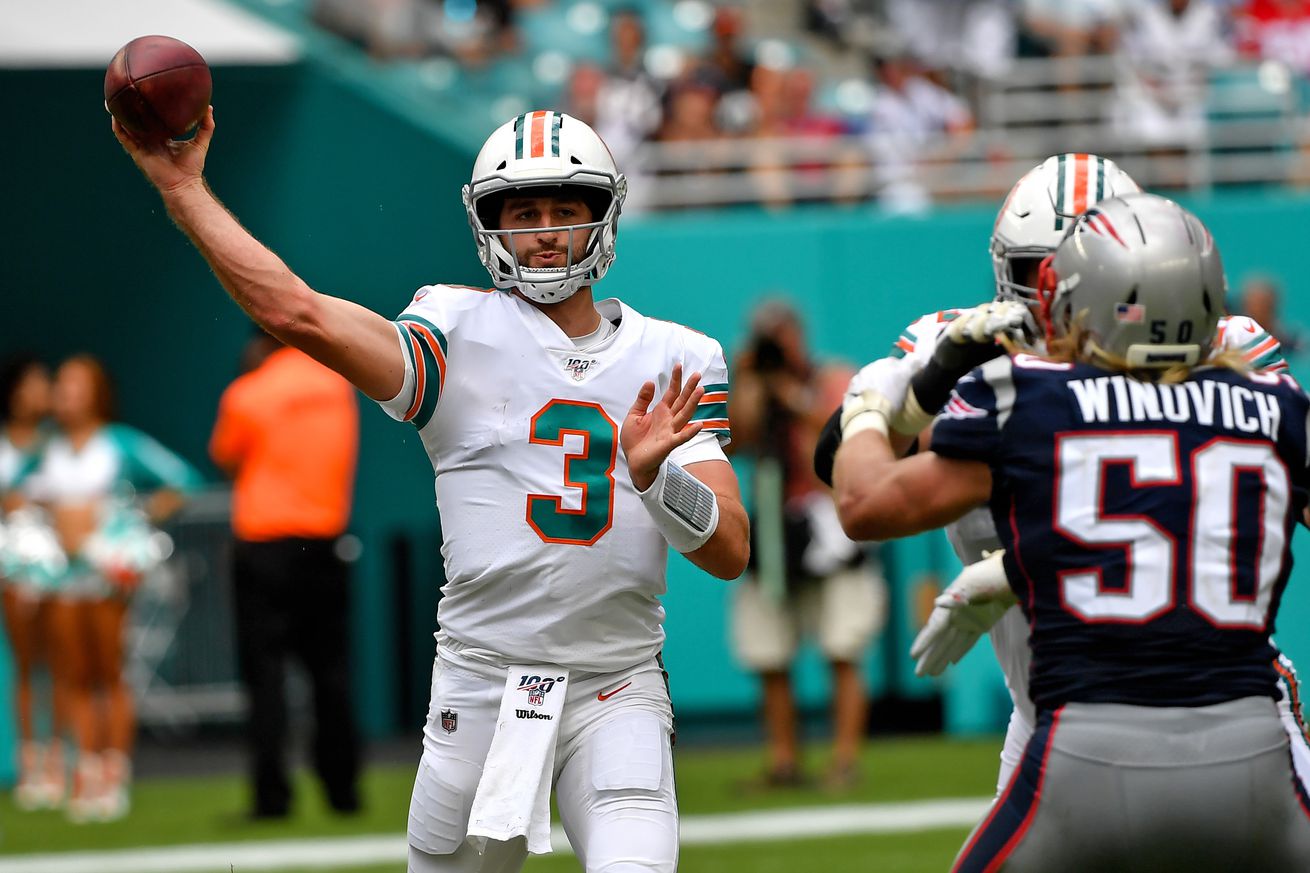 Josh Rosen is the most unlucky man in NFL history.

The Miami Dolphins made the change on Thursday, Josh Rosen will start at quarterback on Sunday instead of Ryan Fitzpatrick. It’s something that seemed to make sense for quite a while. The Dolphins are allegedly tanking in order to draft Alabama quarterback Tua Tagovailoa, but they were able to get Rosen for a sweet deal during the draft, so why not play him and see if he can prove himself as a franchise quarterback?

After all, that was the thinking just a year ago when the Arizona Cardinals traded up five spots to take the UCLA star passer tenth overall. Of course, the Cardinals stumbled their way to a 3-13 finish that saw them fire their offensive coordinator midway through the year and then fire their head coach at the conclusion of his first year with the franchise. New head coach Kliff Kingsbury drafted Kyler Murray, a favorite of his, which ended Rosen’s tenure in Arizona.

Statistically speaking, Rosen was not good as a rookie. He completed 55.2% of his passes for 2,278 yards and his 11 touchdowns were offset by 14 interceptions. However, he was also playing behind one of the worst offensive lines in the league and got sacked a whopping 45 times in only 13 starts.

Coming out of UCLA, though, Rosen was widely regarded as the most pro-ready passer in the draft and drew rave reviews for his polished throwing mechanics and high intellect. However, there were also some curiously sourced rumblings that he was “too smart for football” which caused him to fall in the draft. Nevertheless, Rosen finished his college career as one of UCLA’s most prolific passers, ahead of guys like Tommy Maddox and Troy Aikman.

While learning a new offense in Miami this offseason, Rosen went through some growing pains but was clearly looking more comfortable by the preseason. Through three games, he completed 62% of his passes for 352 yards and while he didn’t throw a touchdown, the offense scored 30 points with him under center, including four different scoring drives of over 60 yards. So far in the regular season, Fitzpatrick has orchestrated only two scoring drives total, and only one of them resulted in a touchdown.

It’s far from controversial to say that Rosen is the better option right now, and even when Rosen has been thrown in during garbage time of both Miami’s blowout losses, he’s given the offense a boost. Last week against the Patriots, Rosen threw for eight more yards on three less attempts, and had two would-be touchdown bombs just flat-out dropped by the receivers:

It’s clear from these clips why Rosen was once highly thought of. His footwork is ideal, throwing motion is fluid, and the arm strength is definitely there, placing those two deep balls as perfectly as anyone could ask for. You get the sense that Rosen could really cook a defense if he had some weapons, but he doesn’t.

Even worse is that Rosen is once again playing behind the worst offensive line in the league. Between Rosen and Fitzpatrick, they’ve been sacked 10 times, and Rosen’s four sacks came on 16% of his passing attempts. If he was sacked at that rate last year in Arizona, he’d have finished the year with 63 sacks, which would have led the NFL in sacks taken by a quarterback. Just watch the last play of last week’s game, where Rosen had exactly one second to throw the ball before not one, but two defenders ran him over, tipping the ball in the process and creating an easy interception off the deflection:

Perfect ending for the Pats.

Pats come with a blitz, get to Rosen and Collins brings down his 2nd INT of the game pic.twitter.com/hpfi0pvPWS

All of Rosen’s evident talent can’t overcome that kind of blocking. And that’s got to be the focus for the Cowboys as they take on this Dolphins offense. If Rosen has time to throw, he can do some damage, especially against a Dallas secondary that gave up 306 yards to the now-benched Eli Manning and 221 yards to Case Keenum.

Last season in Arizona, Rosen held the ball a lot and took on average 3.18 seconds to throw, the second longest time to throw of qualifying passers. And while he completed 55.2% of his passes, he had an expected completion rate of 62.7%. While Rosen was certainly holding onto the ball longer than most other quarterbacks, his offensive line didn’t do him any favors. Football Outsiders gave Arizona the seventh-highest adjusted sack rate and Pro Football Focus ranked the offensive line as the NFL’s worst, pointing out that they had 11 different offensive linemen play at least 100 snaps throughout the season.

Still, Rosen put forth a drastic differential between his actual completion rate and expected completion rate, which means that he’d have done better if something else had gone right. Between having two different offensive coordinators throughout his rookie year and a dreadful offensive line that never had any consistency, it’s fair to say that is probably the reason for his statistically poor rookie performance. Now in Miami, Rosen is playing behind an offensive line that currently has the second-highest adjusted sack rate in the NFL; the pass protection grass isn’t any greener this year.

The Cowboys have their own issues in rushing the passer, managing just two sacks in two games. Robert Quinn will return from suspension to face his former team and should boost the edge rushing presence, but Dallas will be without Tyrone Crawford, their sack leader so far, as well as Antwaun Woods. If they can’t get pressure on Rosen, it might end up being a harder matchup than most are predicting.

Jerry Jones on Taco Charlton: When he didn’t get there, he just wilted

The Marlins Extend Their Shortstop